Nobody ever accused convicted ALF terrorist and HSUS Dogfight Czar John Goodwin of getting bogged down in petty details.

Legalities, responsibility for the health and welfare of the dogs he and ASPCA's Melinda Merck seize, restitution for the cost of failed attempts to kill pitbulls lamentable errors made while pursuing the animal extremist "greater good" ?

Not even on Goodwin and Merck's radar.

In the Line of Duty continues to dance to HSUS' tune, hyping "lucrative" dogfight busts to local law enforcement agencies.

And Norred and Associates? HSUS' private, for profit, hired guns investigators ? Why should Norred give a shit about a country boy, his family, and his handful of dogs? Norred was hired by HSUS to obliterate pit bulls dogfighting, and that's what they're gonna do.

For 12 hours on October 28, 2008, the Woodall family watched helplessly as agents of the Humane Society of the United States, Norred and Associates, the ASPCA, local humane societies and local law enforcement swarmed over their property.

Among those executing the Woodall raid were:

In order to properly identify evidence, analyze it and interpret the findings, you have to know animals and animal behavior. This is what I do and what I bring to a crime scene. I am an animal expert investigating crimes against animals. .

More on Merck's "expertise" below.

HSUS's Chris Schindler. Three months after the Woodall raid, Schindler testified in a North Carolina court that un-weaned pups are "too dangerous to live" and joined with other HSUS employees in urging the deaths of every one of the Wildside Kennels dogs. Schindler, like Goodwin, remains an employee in good standing at HSUS. . .despite the "sea change" at HSUS.

Greg D. Norred, Founder and President and Chuck Simmons, VP Special Operations at Norred and Associates. Like Schindler, Merck, and Goodwin, Simmons is employed by a private, non-governmental agency and is responsible only to the privately employed people who control his pay-check. His boss, entrepreneur Greg Norred, has a background in private sector, for-profit, security services.

The Woodall home, barn and wooded property was searched for nearly 12 hours. Their 13 American Pit Bull Terrier dogs -- eleven adult dogs and two puppies -- were seized on suspicion of dogfighting.

News of Woodall's "arrest" was reported on local television. Joe, a hobby dog breeder who shows his dogs in ADBA-sanctioned conformation events and competes in weightpull trials, became a notorious dogfighter in the blink of an eye.

The Woodall kids had to get up and go to school the next day.

No arrest, no prosecution--but the dogs don't come back

The Woodall family, with good reason, feared that their dogs would be summarily killed as a result of their "rescue". Joe and Tracy's two young sons were devastated by the loss of their special pet dog, Purdy, who slept with them each night.

Yet after the dogs were loaded into Merck's ASPCA paddywagon and taken to another county several hours away from their home, and despite news reports, Joe was never arrested. He was never charged with a crime.

It took the Woodalls two months of frantic effort, and a court order, to get their dogs back. When they did come home, they arrived in sorry condition after eight weeks of "assessment for dogfighting." All had open sores. The gleaming, flawless coats evident in Joe's videos on the day of the raid were gone. Two of the dogs had more significant health problems, especially one of the pups. All of them showed signs of stress and trauma.

But Joe and his video camera succeeded in getting his dogs out alive.

HSUS's strategy all along and across the board is to lower the bar on what constitutes probable cause.

Here's Goodwin gingerly examining one of Joe Woodall's dogs -- a dog which showed no trace of fighting, was in excellent physical condition and showed the exuberantly people-friendly, "correct" temperament for an APBT. The poor dog could have no understanding of what Goodwin's gloved hand placed on her head meant. She was seized a short time after Goodwin's examination.

How low can you go?

But looking at the search warrant application for the Woodall home and property, I have to wonder how much lower the court system can sink.

The remarkable document indicates that the search was based on--

A. A phoned-in tip to a private, non-governmental security firm from an anonymous source.

B. Alleged references in an "underground" magazine of no known veracity -- one that ceased publication more than four years before the Woodall raid.

C. The presence of tethered "pit bulls" at and near the Woodall home.

D. "Independent information" provided by a convicted felon. The informant's statement constitutes a confession to yet another instance of felonious activity, but he can't remember the details of the event he reports because, he testified, he was too drunk to know where he was.

All the justice money can buy

I'm wondering how many pockets were lined by HSUS in putting together the "probable cause" for the raid that ripped apart the Woodall home and nearly killed their dogs.

For the record, the "dogfighting paraphernalia" found in the Woodall home consisted of dog collars, a couple of ropes, veterinary supplies for the treatment of eye and ear infections, a few magazines. . .and the videos Joe had made of his own dogs.

And his dogs, of course. Here's a shot of Melinda Merck removing one of two healthy, well-cared for puppies from the Woodall home. She got the other one a few minutes after this shot was taken.

Neither puppy returned in the excellent condition they left the Woodall home in.

Eight weeks of "assessment" failed to identify any evidence of dogfighting in any of Joe Woodall's dogs.

You'd think that the ASPCA's so-called forensic expert could have established that the dogs were in excellent condition, and had beautiful, very friendly temperaments in something less than eight weeks, wouldn't you?

Or was Merck's only purpose to sign off on the seizure of dogs--any dogs--and let the chips fall where they may? Maybe do an interview or two, have a little lunch. . .

Who speaks for these victims?

That's what I want to know.

Who's going to put the world back together again for kids like Joe and Tracy Woodall's children?

Children who had their lives torn to pieces because HSUS and the ASPCA can get away with it, and learned the hard way that innocence will not protect them?

Does anyone really believe that HSUS magically changed its ways, when the people who organized these kinds of tragedies remain in place ?

Short of a brain transplant for John Goodwin, I don't see how it's possible.

How about those 350 or 450 or who-knows-how-many dogs seized in the "world's greatest dogfighting bust", orchestrated by HSUS's usual players: Goodwin, Norred and Schindler, with the ASPCA's Merck there to rubber stamp the proceedings? What about the myriad other busts taking place across the country?

Does anyone else worry that dogs just like Joe Woodall's got scooped up, and will probably die when HSUS and its local proxies determine that, too bad, too too bad, the dogs were too ill/too injured/too "unsocialized" ?

Or maybe they'll use the "no room at the inn" excuse. Hard to take coming from the world's largest, wealthiest "animal advocates" but I think it's coming.

Nothing about what happened to Joe Woodall's dogs demonstrated care about their welfare. Nothing. HSUS's and ASPCA's only interest was in seizing the dogs.

Joe Woodall thinks their purpose is to exterminate all "pit bulls." I think he's right. So, how much longer can this abuse continue? About Joe's videos

Joe Woodall placed several videos on YouTube. Many mix shots of his dogs at weightpull trials, playing with his children, etc., with clips of the HSUS/ASPCA raid on his home.
A couple of highlights:
At roughly 3:15 minutes, this clip shows Goodwin's review of Woodall's dogs, including his preoccupation with their pedigrees and near complete disregard for how well they are cared for.
At roughly 3:51 minutes on this tape, Melinda Merck seizes the smaller of Joe Woodall's two puppies as Joe struggles to get Merck to admit that there is nothing wrong with the pup. Joe's voice rises a bit.
Understandable, doncha think?
Posted by BlueDogState at 3:08 PM 19 comments: 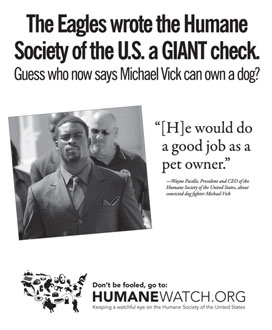