Are those Dems hoping to drive "undesirables" out of town?

A month and a half before municipal elections, and Haverstraw's Town Council decides now is a good time to piss off an estimated 70% of the electorate: the voters that own dogs and cats.

Back on September 24 responsible dog owners got some nasty news. The Town of Haverstraw, one of the last municipalities in Rockland County, New York without limit laws restricting pet ownership, moved unanimously to dictate the maximum number of dogs law-abiding residents, voters and tax payers are allowed to house on their own private property.

In Haverstraw, the magic number is now . . . four.

"It shall be unlawful to keep more than four adult dogs" on a residential lot.

So rescuers, pet dog owners, dog breeders, or anyone else with more than four dogs . . . you're almost certainly in trouble if you're living in Haverstraw.

Town ordinances allow you to apply for a kennel license, of course. Good luck with that.

Haverstraw is reportedly considering restrictions on cat owners, too.

License to kill in Haverstraw: open season on dog and cat owners

Anybody else notice how far a barking dog dispute between a couple of neighbors strayed?

What is the goal of the Haverstraw Town Council, anyway?

What the hell does liability insurance have to do with barking? Haverstraw already has a nuisance noise ordinance on the books, and it covers barking dogs.

Or is the problem that these particiular allegedly barking dogs in one particular home in Haverstraw happen to be pit bulls?

So Howard Phillips and the rest of the Haverstraw Town Council are lemmings.
Lemmings that don't hesitate to persecute dog owners. Especially pit bull owners.

My Dog Votes. My cat votes, too. 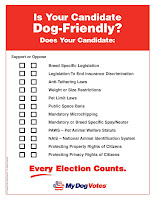 Devoted pit bull owner and Haverstraw resident Louis Seward votes, too. He's got five dogs and he loves them all.

Dogs are designed to be men's best friends," Seward said, as he watched his dogs basking in the sun in his front yard. "God didn't give us dogs for your neighbor to choose how many dogs you should have. God gave us dogs to have reliable companions.

Mr. Seward has a point.

Did the Town Council decide he must be a gangbanging, drug-dealing criminal anyway? Are they looking for a way to run him out of upwardly-mobile Haverstraw?

Democrats had better learn that pet and animal owners aren't looking for draconian,

abusive, destructive laws from their elected officials. They're not too happy with Democrats that line up against law-abiding dog owners, either.

And profiling? Is that what the Democratic Town of Haverstraw council members are indulging in?

You better hope not, Howard Dean. Traditionally Democratic voters, people like Louis Seward and me, don't like that shit.

Man, if he only knew then what we all know now: Damn the torpedoes, somebody's got to shut Whoopi the hell up!

Did Whoopi have a bad first day at her new job?

Or were we played?

Calculated media strategy or not, Whoopi's talk show debut turned into a circus that won't be forgotten anytime soon. It all focused on her failure to toe the party line on the subject of Michael Vick.

Whoopi didn't join hands and sing along with the carefully orchestrated chorus in a round of "Neuter Michael Vick." Nope. She had the temerity to express a different thought on a controversial, painful, subject. She said:

THERE'S ALL OF THESE VERY VERY STRONG OPINIONS ABOUT [Michal Vick]. AND ONE OF THE THINGS I HAVEN'T HEARD ANYBODY SAY IS, YOU KNOW, FROM HIS BACKGROUND, THIS IS NOT AN UNUSUAL THING FOR WHERE HE COMES FROM.

So here's where it gets really interesting:

Whoopi was basically voicing the racist, elitist stereotyping drivel the Humane Society of the United States

and its proxies and partners have been dishing out for years. She essentially regurgitated that "pit bulls are the breed of choice of. . ." blah-blah that HSUS has neatly packaged and pedaled all over Hollywood.

Last year Kentucky Humane red-lined by zip code the blackest, poorest sections of Louisville for special--breed specific--assistance. They wanted all those "pit bulls" residing in the "wrong" place and with the "wrong" people permanently removed from the gene pool--and they wanted it FAST.

Profiling is just fine with the "animal protection" crowd. As long as they are the ones doing it.

Wayne Pacelle protests wa-a-ay too much. Somebody pass the duct tape!

Wayne, where were ya when Peter Vallone Jr. tried to legislate pit bulls out of the City of New York by painting pictures of pit bulls as "the weapon of choice of drug dealers and gangs seeking to intimidate and terrorize neighborhoods"?

Huh? Where were you when we needed you?

In his blog, Wayne claimed he likes Whoopi, but writes--

partially eaten away by a prion.

I got news for ya, Wayne. Spongiform encephalopathy is contagious. And so is Geraldo Rivera-style hypocrisy, apparently. A vegan diet won't protect you from either disease. You better get yourself checked out. You need help.
Posted by BlueDogState at 9:51 AM 1 comment: